The art of bringing video games and movies to life often involves esoteric means and processes that are hidden away in the workings of the industry, mostly unseen by fans and the general public. This is a brief article explaining one of the lesser known jobs that are often used in the industry, the creation of character sheets.

What is a character sheet?
The building and rendering of 3D characters for video games and movies requires accuracy and must also abide by values already established by a franchise. The fans were in uproar when nipples appeared on Batmans’ suit. So to bring a character to life and stay true to the art direction, 3D artists need the best references possible for both time efficiency and ease of workload. This is where we bring in Character sheets.

A character sheet is a set of 2D views projected flat from the front, back and side, with no perspective or ‘lens distortion’.  Sometimes a top and angled (or quarter) view are also necessary to bring full clarity to a complex shape.  If you’re unfamiliar with the term character sheet, then you may instead have heard of a model sheet, orthographic projection, blueprint, T-pose or a three-way diagram.

To bring the exact dimensions to the table, the artist needs to carefully collate and examine the art direction, preliminary sketches, concept art and to enhance all this information with the collecting of references for body shapes, anatomy, musculature, posture, clothing styles, accessories, weapons and numerous other factors.

In this example, we’ll be looking at a character from the upcoming Ghost Recon Wildlands by publisher Ubisoft. 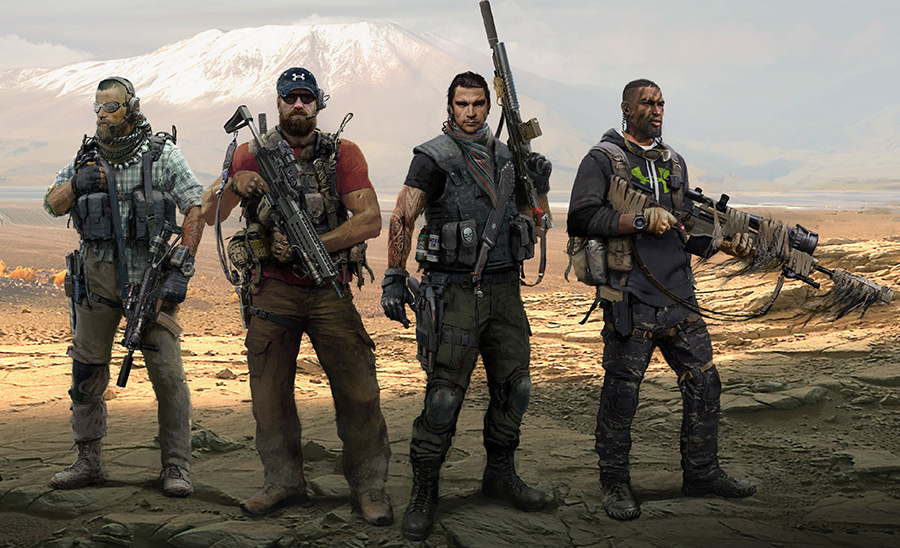 The concept art for the four main characters above is generously detailed and realistically grimy. There is still more detail to be enhanced, and if you’re familiar with Tom Clancy’s Ghost Recon franchise, you’ll know it’s essential that all the equipment and apparel is authentic to the modern practices of Special Ops and tactical missions. No unwanted nipple protrusions thanks, unless they’re on the side of L3 GPNV-18 Night Vision Goggles.
So reference materials and advice were obtained for each of the items that would be used by each character, right down to the bootlaces.

Designing the Character Sheet
This particular member of the Wildlands team is Rubio Delgado, codename Midas. He is the teams’ Assault specialist. Being an assault-kinda-guy, his apparel would be more ‘military’ than the others, with less of the civilian touch that helps the others blend in when they need to. His specialist gear would include an assault rifle with grenade launcher, Serbu Super Shorty pump action shotgun, flash bombs, smoke grenades, machete   for foliage clearance, and full molle tactical vest with ammo pouches. Added to this are the touches that would help establish a sense of character depth and personality, such as his hair and features, his build, the full arm tattoo’s, the deaths head emblem, and the keffiyeh (shemagh) scarf, – the little things that give him some idiosyncrasy. 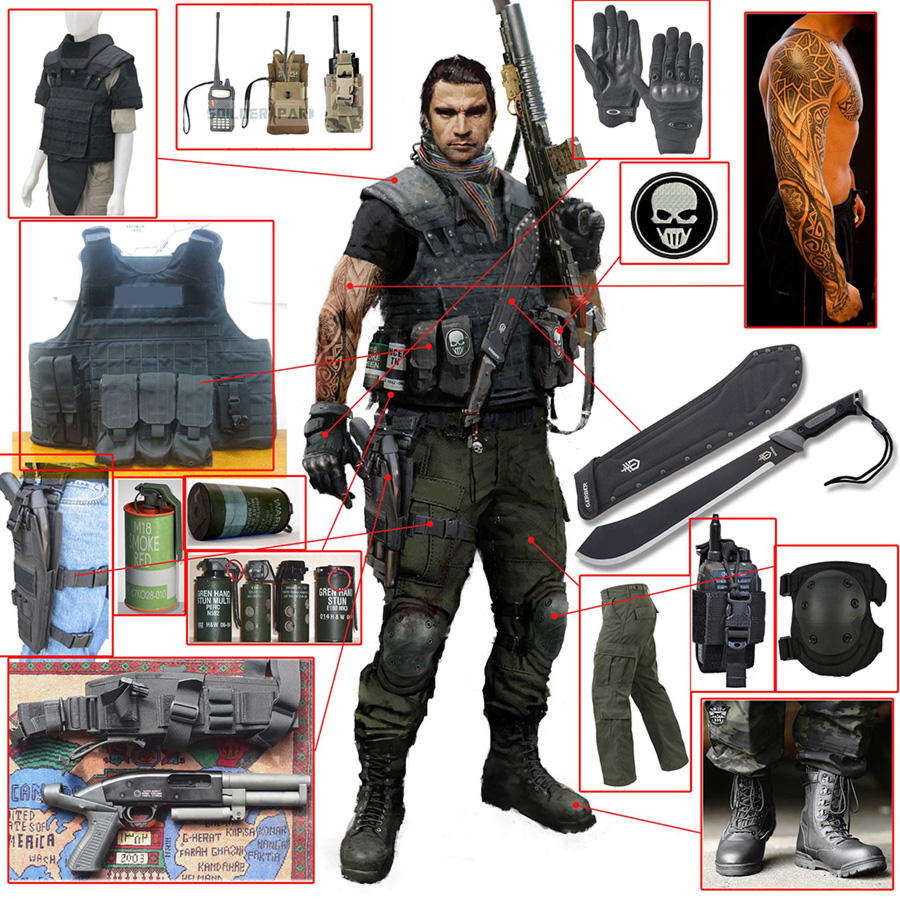 Using the stock skeleton that Ubisoft maintain for their Recon characters as a template, I drafted up a rough orthographic to establish Midas’ build and the placement of all his gear and apparel, using the character painting as principle guide, whilst maintaining the relative scale of the accessories from the reference pics. Click on the images for a better look. 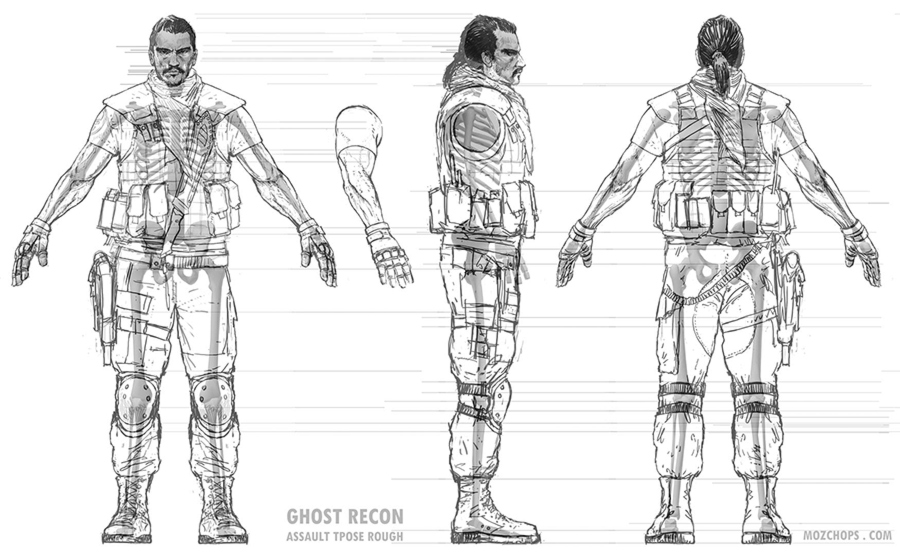 The next phase is enhancing and detailing, and making sure the items sit realistically.  Careful attention has to be paid so that there are no errors in the relative positions of components between the three views. Here’s the finished orthographic projection below. Note, the detached arm, so that the side of the character is not obscured. 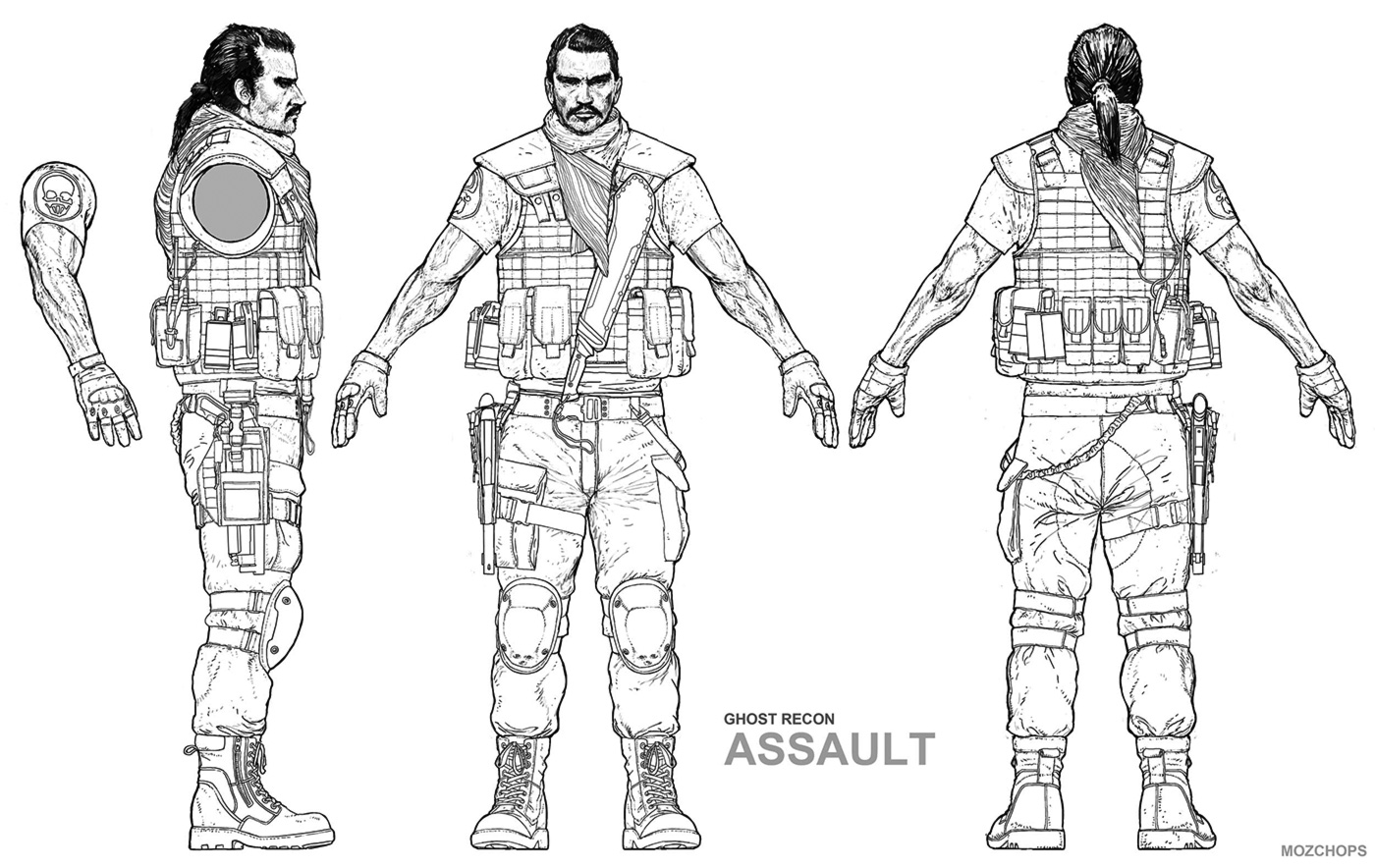 The finished orthographic is then passed on to the 3D artist, this is an early render of the character build in progress, sans facial hair. 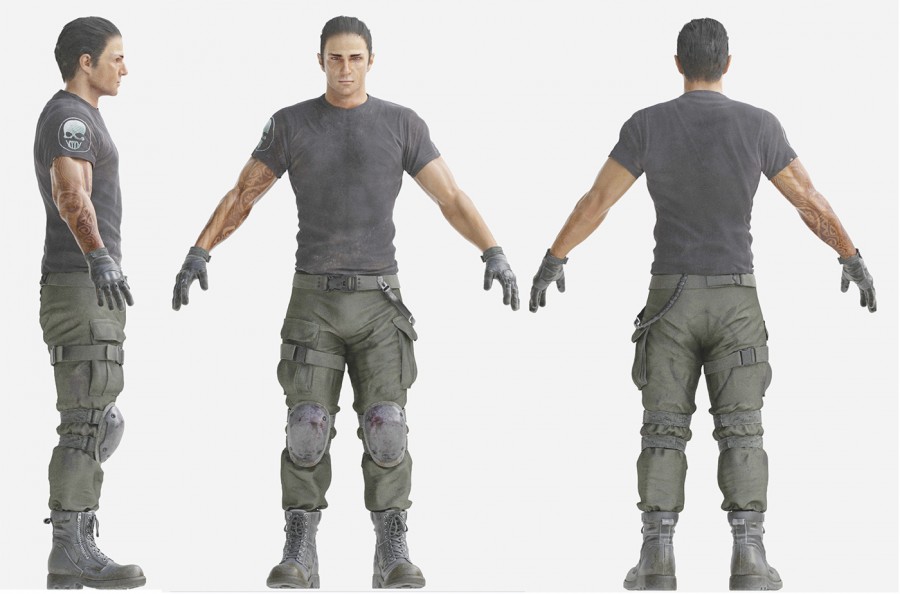 The work then continues until you have a full 3D character, complete with textures, materials and a rig for animation. These are some of the promo shots of Midas. 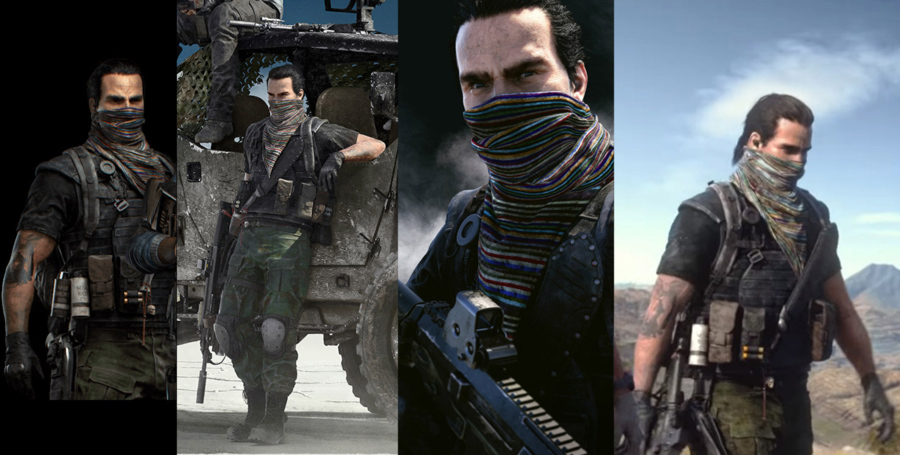 Here are the other three principle characters of the Ghost Recon Wildlands team, with work in progress renders. More orthographic sheets of numerous other characters and creatures from various games can be seen on the technical drawings page. 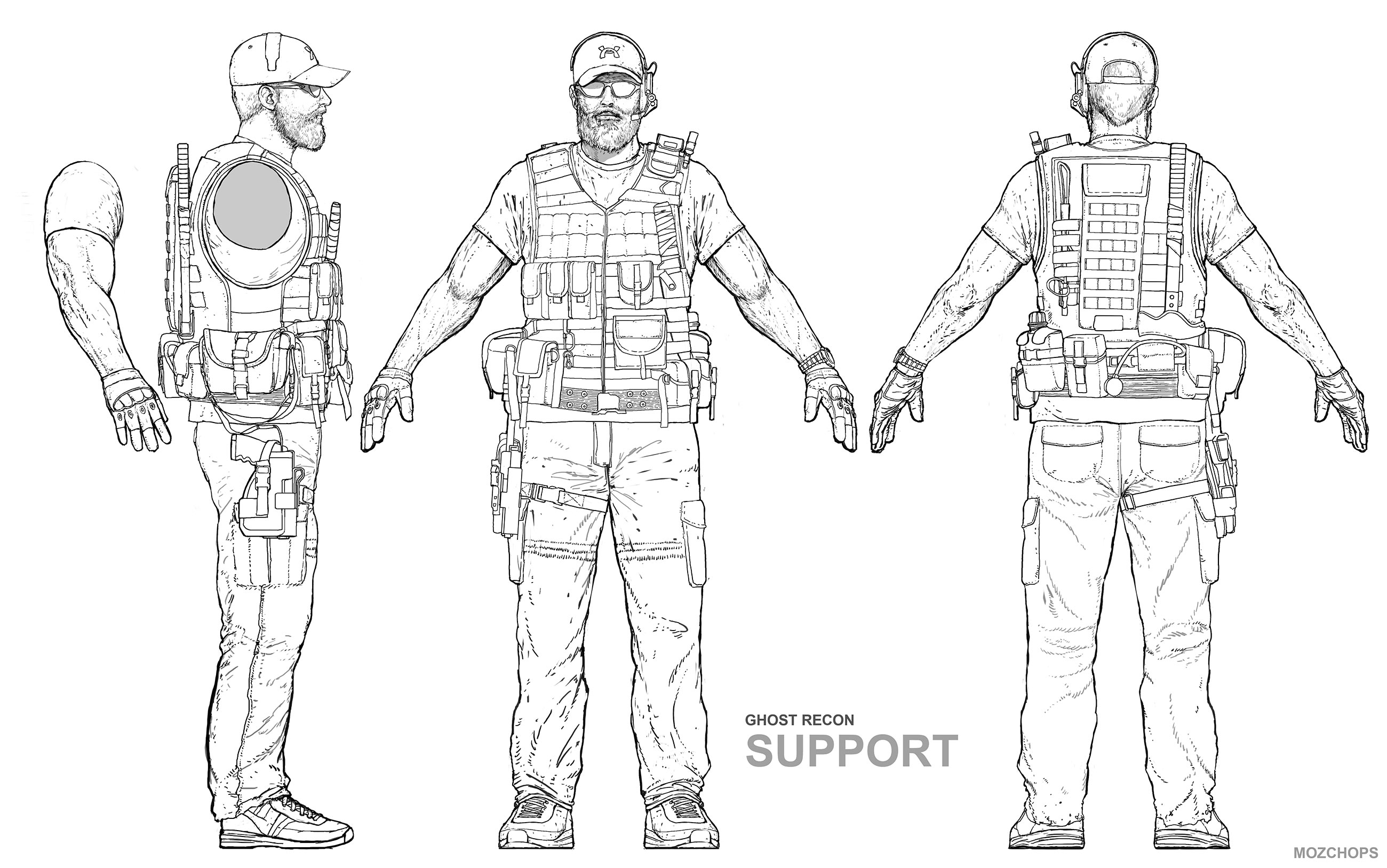 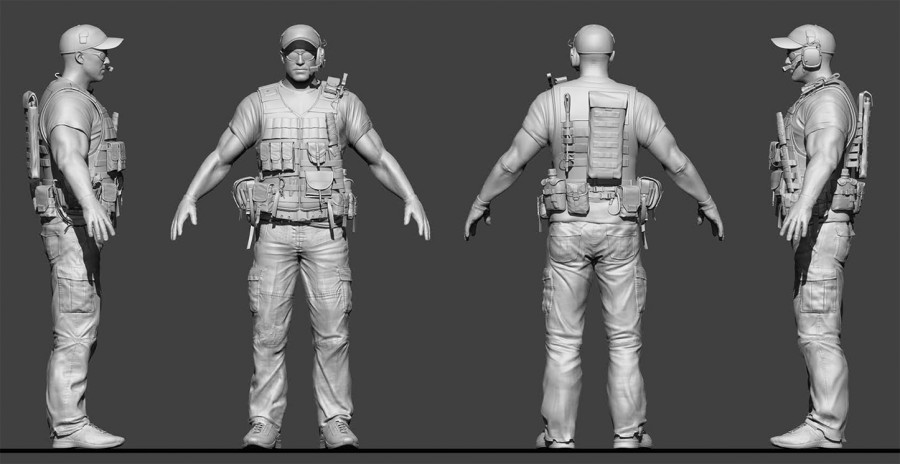 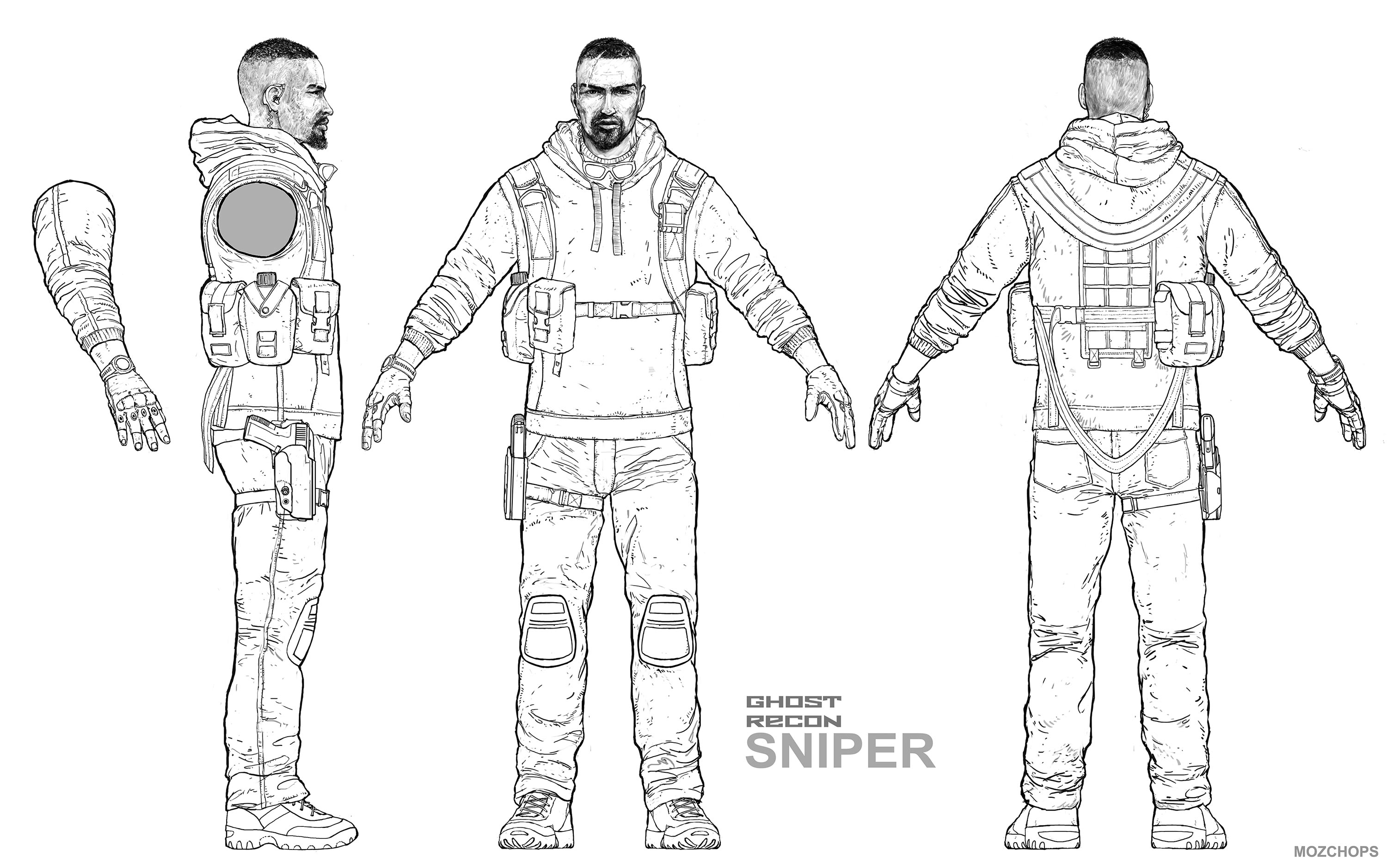 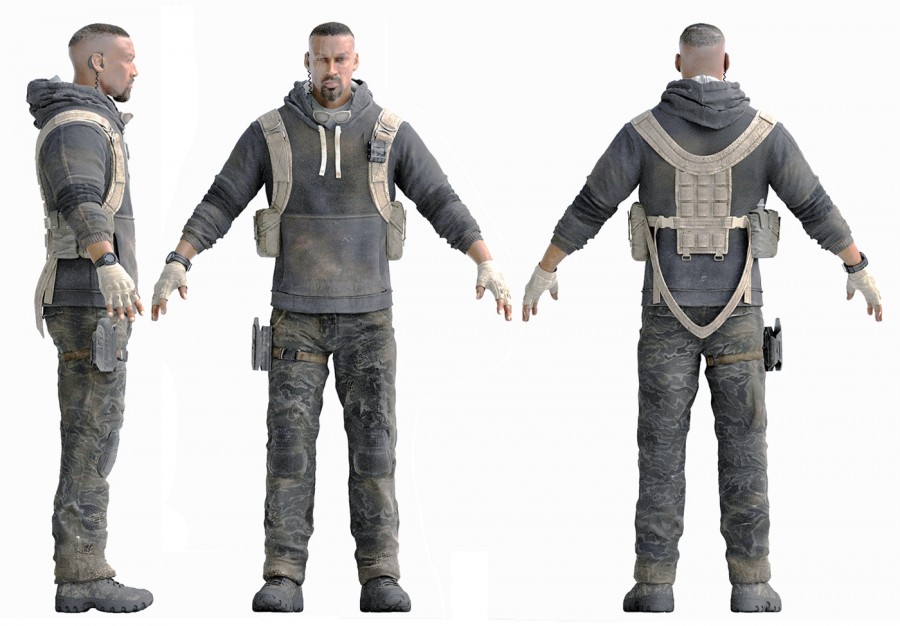 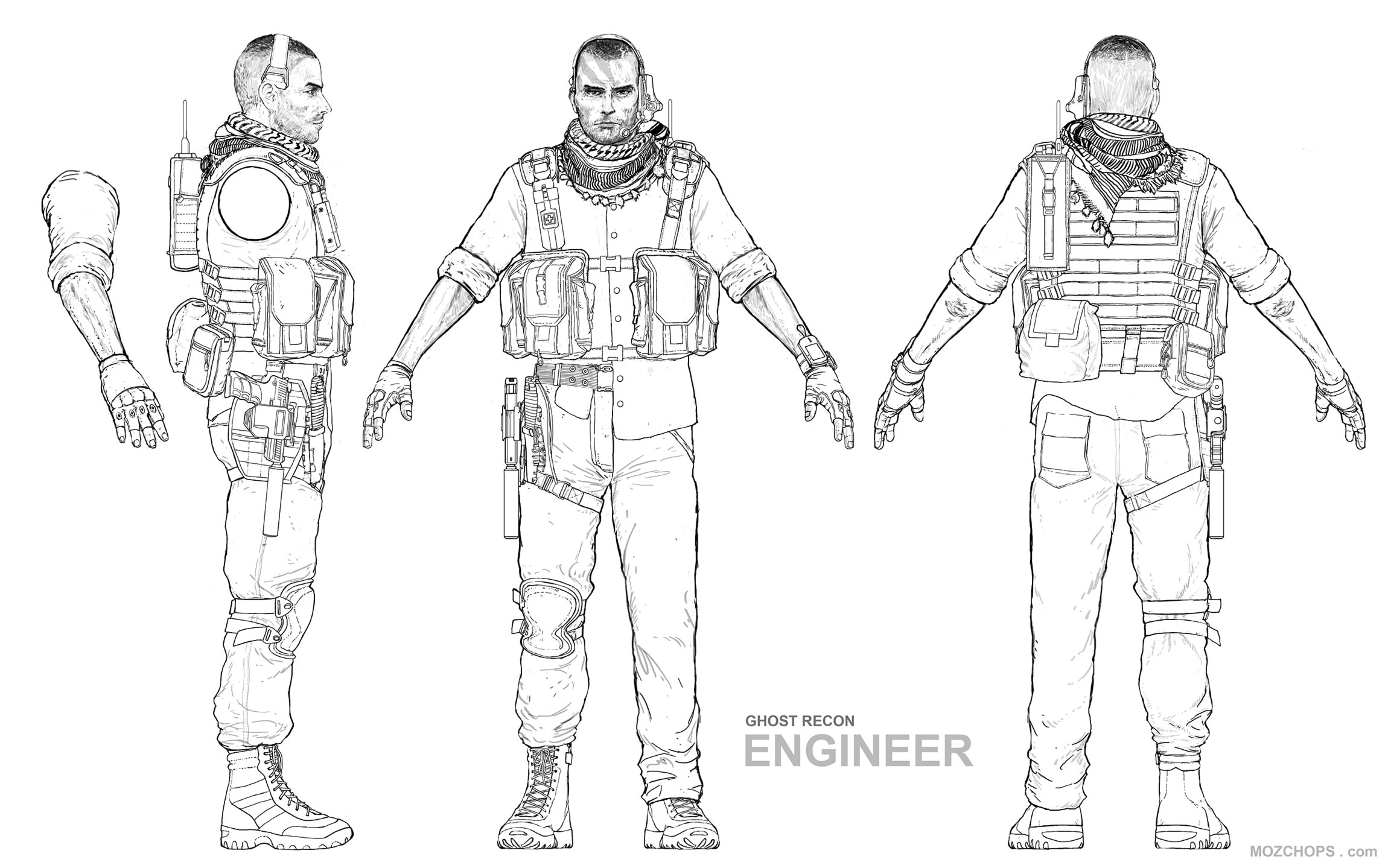 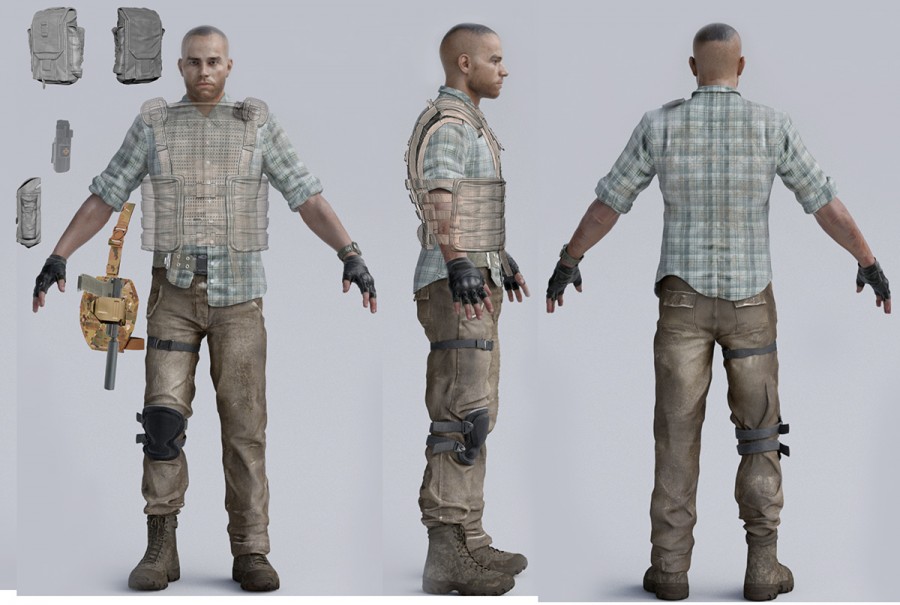 The Wildlands team went to great lengths to add more background to the character; Click here for a more in-depth profile on Midas and Sniper Weaver.
Ghost Recon Wildlands will be available March 7, 2017, on PlayStation®4 system, Xbox One, and PC. 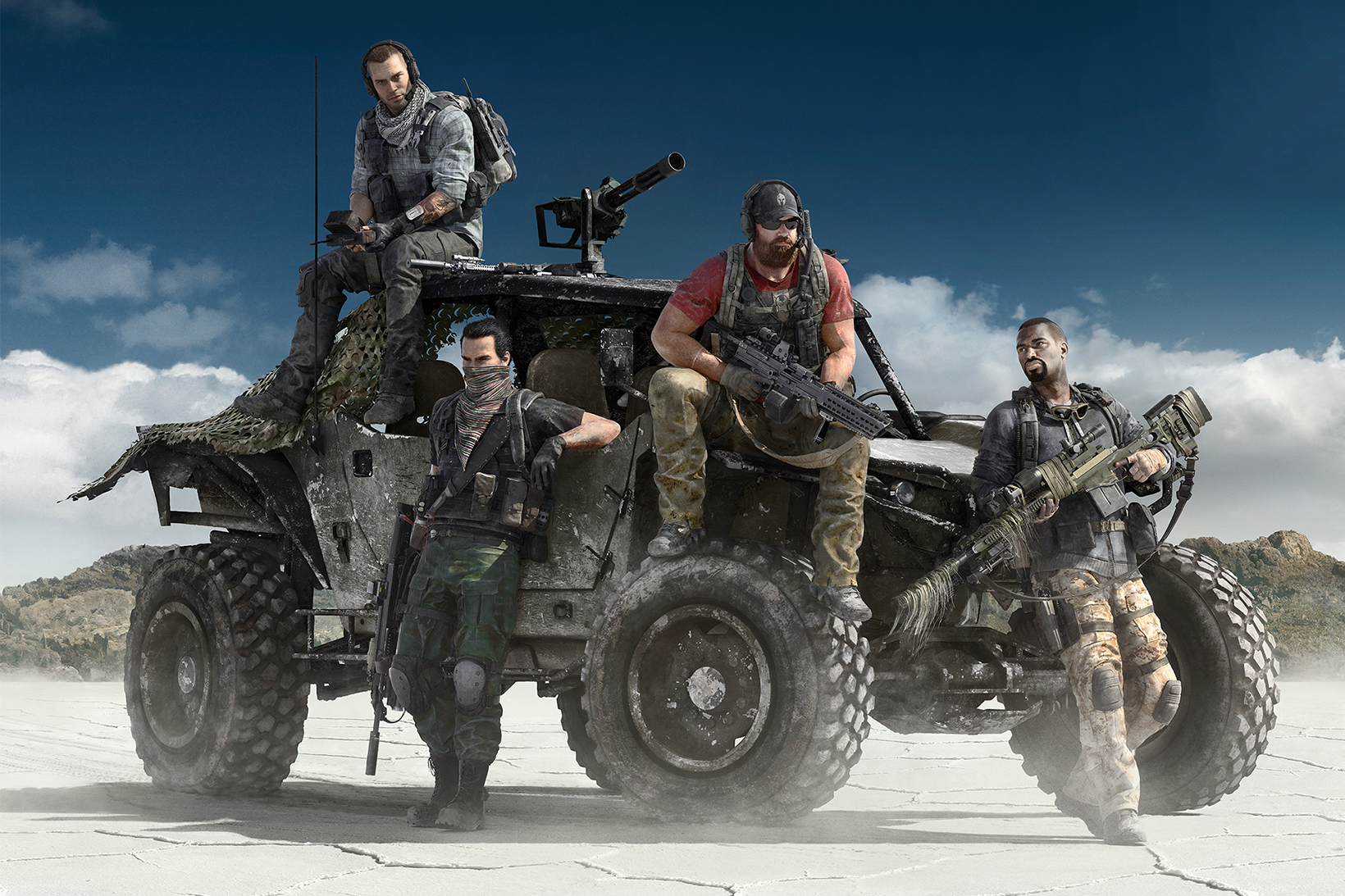